This year I finally got around to making my first trip to Asia.

For my first destination in Asia I chose Northern Thailand and spent almost two weeks exploring with a small group from Bangkok to Chiang Mai before returning to Bangkok.

On arrival at Bangkok's Suvarnabhumi Airport off my 11 hour EVA flight from London Heathrow I used the VIP Meet & Greet Service to fast track myself through passport control which is otherwise a lengthy wait. Baggage arrival was fairly swift and I was soon on my way to my hotel taking the modern SRTET City Line which cost only 45 Baht and took only half an hour to reach central Bangkok's Phaya Thai station. It's a busy train most of the day, full and standing for most of the journey.

I was staying at Nouvo City Hotel in the Ban Phan Thom area of Bangkok so needed to reach there by bus or taxi from Phaya Thai . Being environmentally conscious and used to taking public transport normally I opted for the bus. Buses in Bangkok range from 10 to 30 year-old vehicles with timetables somewhat inaccurate going on Google Map estimates. This is mainly due to the extreme traffic congestion most of the day throughout Bangkok. I almost bailed and took a taxi but luckily the bus I needed turned up eventually and was air conditioned. A conductor on board takes the fare, which for my half hour journey was around 15 Baht versus 100 Baht or more for a taxi or tuk tuk, still very cheap by comparison to other countries!

Certainly the first thing that hits you upon arrival is the heat, pollution and amount of traffic in central Bangkok. Crossing the road you pretty much just have to take your chances as most crossings aren't light controlled and where they are, they aren't really respected by motorists.

The very grand and modern Nouvo City Hotel stands out amongst the rest of the buildings in the area which are otherwise quite tired and grungy in appearance. The hotel has no less than two rooftop swimming pools and quite spacious rooms although some of the fixtures and electrical sockets felt a little flimsy and unsafe to use. The minibar includes free bottled drinking water since tap water isn't really suitable for drinking in Thailand. I spent two nights there before joining my Intrepid Travel tour group to head north.

On my first full day in Bangkok I walked a circular route across the Chao Phraya river taking in the Rama VIII Park and exploring some residential spots off the tourist trail in the Bang Yi Khan area. It's a brief respite from the traffic clogged roads elsewhere and a real taste of how the rest of Bangkok might once have been before private motor vehicles became the primary means of transport there.

After cooling myself down with an iced coffee at Cafe Velodome I explored Wat Pho which is a huge temple complex including a giant reclining Buddha. There's so much to see there and certainly worthwhile getting there early before it gets very crowded.

Next to that is Tha Tian Market where you can find quite a good range of cafes and restaurants where I enjoyed a delicious plateful of chicken pad thai at AMA Art & Eatery.

Finally on my first day I met up with the tour group at the hotel for introductions and then out to the Khaosan road for an evening meal. I turned out to be the only guy in the group which I didn't mind too much. The group make-up included three Germans, one other Irish, one Australian and one Austrian.

The group tour commenced with a public bus to Sukhothai Historical Park. This was a 6-7 hour journey starting from just outside of Bangkok's centre at Mo Chit Bus Terminal. Included in the fare is a brief comfort break and simple lunch half-way through the journey at a service station. Motorways in Thailand are relatively smooth and uncongested outside of Bangkok although major road junctions aren't grade separated from the main carriageway. Consequently there's often quite a long distance of doubling back to reach exits and service stations on the opposite carriageway.

We reached Sukhothai bus terminal in the middle of the afternoon from where we were met by a local pickup taxi truck to take us to the historical park and hotel which is about half an hour away. Accommodation was at the very luxurious and peaceful Le Charme resort including an outdoor swimming pool.

During the stay at Sukhothai resort we did a bike tour which included an exploration of the historical park. The tour took in partially restored 13th and 14th-century palaces and a delicious picnic prepared by some of the local residents there. This included many local specialities cooked and freshly prepared for our group which were explained to us.

For the afternoon I relaxed by the pool and sampled my first Thai massage at the hotel resort. Maybe I was expecting something more vigorous but I didn't really feel any different for better or worse after the massage.

Enroute to our homestay part of the tour we stopped off at Friends of The Asian Elephants hospital. The elephants here are typically victims to land mines and accidents which have damaged their legs and often required amputation. Reasonable distance from visitors is maintained for the elephants so they're not made to feel uncomfortable or forced to perform.

We arrived in the late afternoon at our homestay where I was assigned my own bedroom in a tiny elevated hut to sleep in as I was the only guy in the group. A mosquito net was thankfully provided although I'd brought my own just in case. For the evening activities we were entertained with a series of outdoor dance performances by local children, a cooking class and traditional music performed in front of us while we enjoyed a freshly prepared feast.

The following day I awoke to the sound of many a rooster in the otherwise peaceful setting of Thailand's countryside. Prior to departure for Chiang Mai we spent the morning cycling round country lanes stopping off along the way to observe the traditional method for rice production, growing speciality mushrooms, visiting a local food market and a textiles mill.

On our trip to Chiang Mai we were conveyed in pickup taxi trucks, otherwise known as Songtaews, which are the dominant form of transport for groups of people in many parts of Thailand. This fairly basic form of vehicle has no seatbelts or rear door. Seating is on benches in the back with luggage placed either alongside passengers or on the roof.

I think Chiang Mai was certainly the highlight of my trip. It's still quite a busy, congested place but compared to Bangkok feels a much calmer and reasonably sized place to explore by foot.

On the first evening I once again sampled a Thai massage in Chiang Mai which felt better than the first. Later on I joined the rest of the group for food in the huge and bustling Kalare Night Market. It's a place full of activity late into the evening and a wide choice of places to buy street food and drinks from for a very reasonable cost. Music is performed live and there are plenty of tables to sit, eat and drink at. 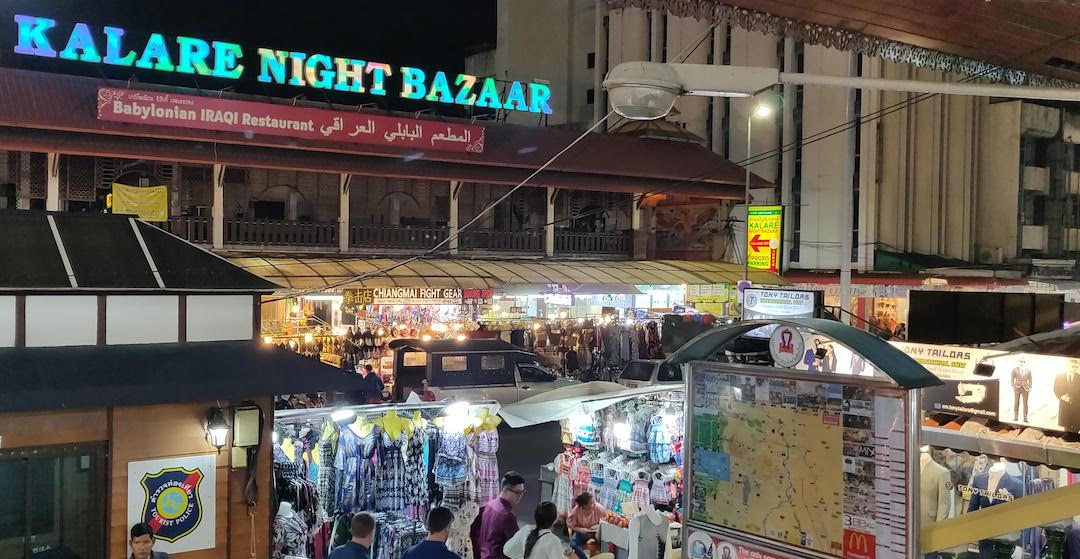 The following day in Chiang Mai included a guided bike tour by a local of the surrounding country lanes where we were shown round the Chiang Mai Leper Asylum and some more Budhhist temples along with a stop-off at a coffee shop.

That evening I joined part of the group in another pickup taxi truck to catch a magnificent sunset over Chiang Mai from the Budhhist temple Wat Phrathat Doi Suthep. It's located quite far up a long, long winding road above the city so took quite a while to reach after escaping the evening traffic jams in Chiang Mai.

On our last day in Chiang Mai I was awoken by an earthquake emanating from Laos with a magnitude of 6.1! Prior to catching the overnight train back to Bangkok, I spent some time alone exploring the old walled city. Keeping off the main roads there are some delightful narrow lanes with a range of craft shops, independent coffee shops and places to eat.

The overnight train back to Bangkok was fairly smooth, spacious and quiet enough to get a few hours of rest albeit not a full night's sleep. It's quite a modern train and second class accommodation has communal single bunks with privacy curtains, modern Western-style toilets and washing facilities.

Arrival back in Bangkok was on time at around seven-o-clock. Our group was then transferred by taxi back to the Nouvo City Hotel where we could freshen up in some of the hotel's day rooms before a final farewell breakfast at a nearby cafe. I was a bit sad to be ending my tour here whilst most of the group were continuing on to explore the south of Thailand.

Before departing Thailand I'd a couple more days left to explore Bangkok by myself. I opted to stay in a different, better connected part of the city at Ibis Sukhumvit. It's an area that feels far more polished, modern and futuristic with an elevated metro system, high-rise offices and apartments. What's the same, if not far worse, is the intense level of traffic congestion!

I quite enjoyed my last three days in Bangkok: taking my time to visit some other parts including another temple, Wat Arun Rajwararam. Being there over the weekend meant I was also able to experience the huge weekend market at Chatuchak. Food hygiene certainly isn't the best but I survived and quite enjoyed the choice of street food available at the market. Another less touristy, indoor market I came across was at Samyan where I found a good choice of cheap, clean restaurants on the upper level with some nice seafood options.

On my final evening I headed across the river to the upmarket Iconsiam shopping mall that opened last year. There's a free bus and boat shuttle connecting with the nearby sky train. The evening is the best time to visit here when there's an awe inspiring display of lighting and music-combined water fountain performances outsid. There's an incredible buzz of activity inside on the ground floor with numerous food stalls, a boxing stand and cafés.

Almost every street you walk along in Thailand's towns and cities there seems to be street food of all sorts ranging from fruits to cooked chicken, pork and smoked fish. Although very cheap little of it seems to be hygienically stored and prepared. I refrained from sampling much street food beyond the main food markets streets and venues.

One thing I'd never experienced was how being taller than pretty much everyone else, other than other tourists, really does make you stand out. On one occasion I was the subject of someone's selfie when travelling the subway train!

I'd definitely love to return to explore more of Thailand and beyond in South East Asia. Thailand's scenery, the kindness of its people and the overall culture really can't be missed!