Earlier this month I travelled to Vienna on my first trip abroad for 2019.

Between jobs it was my first opportunity in a while to take some time out, refresh and enjoy an easy-going, relaxed city break somewhere not too far away. Weather conditions were near perfect start-to-finish, and not being the holiday season, meant fewer crowds and a reasonable rate at my Ibis hotel 10 minutes from the city centre.

This wasn't my first visit to Vienna, in 2007 I made a brief two-night visit whilst on my gap-year trip staying mainly at hostels and Interrail-ing between Central European cities. Back then I arrived at the then bustling Westbahnhof. This time however I flew in direct from London and then picked up a RailJet train into the new and architecturally impressive Hauptbahnhof.

Tip: when choosing the airport train to the city-centre, save yourself half the cost of the tourist-touted CAT and instead use the RailJet trains for just €4.20 - that also includes onward travel by tram/metro/bus.

After settling in at my hotel I ventured out for an evening meal at a nearby traditional Austrian restaurant located in the Schlossquadrat. It was a busy Thursday night but the waitress there kindly found me a small quiet table by the window and promptly serve me. Having had my fair share of schnitzel on recent trips to Germany, this time I went for something different, instead having a chicken fillet with dumplings and a creamy white wine sauce.

On my first day I explored much of the city centre on foot beginning from Schwedenplatz metro station, heading over to St. Stephen's Cathedral and Café Central via the narrow streets and alleyways. Graben, one of Vienna's main shopping streets, in comparison, is quite wide, pedestrianised throughout and lined with large retail stores, restaurants and other businesses.

After quite a lot of walking I went for a roundtrip by tram following the grand boulevard, Ringstrasse. The road and tram route roughly follows much of the original medieval city fortifications although you do need to know where to change trams as most routes seem to diverge off the ring at some point out into the suburbs.

In the afternoon I joined the free walking tour organised by Good Tours Vienna in English. This began at Albertinaplatz where we were split into two large groups and assigned our guide, Wolfgang. The tour took in most of the major city centre sights including Mozart's statue in the Burggarten, the Hofburg palace, Staatsoper (Opera House) and Petersplatz. Wolfgang also took us past one of Vienna's top restaurants for the local speciality Wiener Schnitzel at Figlmueller.

Taking in Vienna at twilight I decided to head over to Wiener Riesenrad to take in the cityscape from a high vantage point. The full circuit takes about 15 minutes. 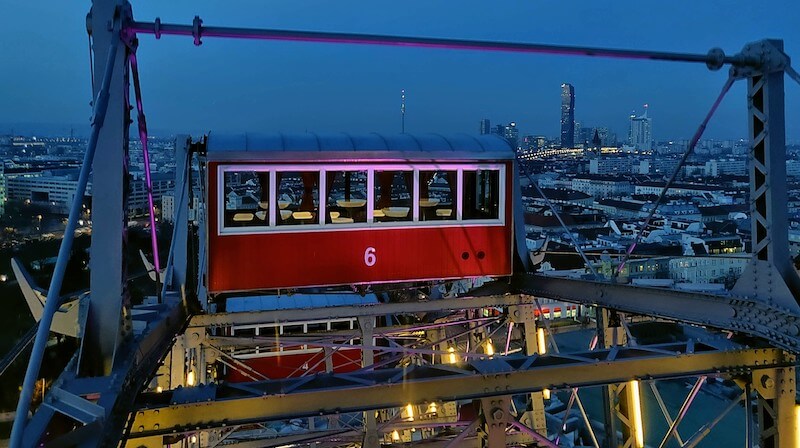 On my second evening I dined at Bier and Bierli which had a wide choice of locally crafted beer alongside a typical choice of Viennese cuisine.

For my second and final day in Vienna I walked through the Naschmarket shortly after opening, before the shopping crowds and then spent the rest morning at the Kunsthistorische museum which is one of many museums adjacent to each other located in the museum quarter. There most of the artwork is described in both German and English. There's also an audio guide and touch screen panels to delve further into information and videos about the exhibits.

After a sizeable lunch at Hungry Guy I walked across the Danube River towards one of Vienna's many parks, Augarten. Here there are two of the city's former World War II concrete megastructures. The Flakturm anti-aircraft towers also doubled up as civilian shelters during air-raids. They're not open to the public and certainly not Vienna's prettiest architectural sights!

Returning on an early flight the next morning I went to pickup a few light snacks for dinner at the one remaining BILLA superstore open after 6pm in Vienna at weekends. It's a busy but well stocked store spread across multiple floors with plenty of freshly prepared takeaway items from the bakery and delicatessen.

Up bright and early for my return flight I once again took the comfortable RailJet train on the short, fifteen minute ride the airport. Unfortunately a combination of the airport's unconventional layout for departures and my going to a non-Shengen destination meant I ended up penned in at the departure gate for over an hour.

I'm pleased I took the opportunity to revisit Vienna. The city has a safe, tidy and unpolluted feel about it. Rates of homelessness and street begging for the most part seem quite low in comparison to British cities. Cost-wise it's reasonable with transport, food and other items not too expensive based on the mainly mid-ranged restaurants, cafes and shops I visited.